Collection of the Computermuseum at the Department of Computer Science

This is a tube based magnetic drum computer of the first generation. Considering its volume and purpose it can be called a very early mini- or personal computer. The computer is in very good condition and fully functional.

Concerning the picture above: The photograph dates from ca. 1968 and shows Mr. Richard Herbrik at the LGP-30 from the Institute for Process and Steam Engineering (IVD). Unfortunately the photograph has declined over the years so
that the colour of the computer can't be perceived very well. But what can be seen quite clearly is the dark scratch on the front of the highspeed reader/punch. It can still be seen today. In addition, the remains of the adhesive strips used to attach the reference card right of the display are still there. Since these remains are very resistent against any form of
solvent, we decided to reattach such a card where the old one has been 32 years ago. So the picture really shows idem computer as it is in our museum today. 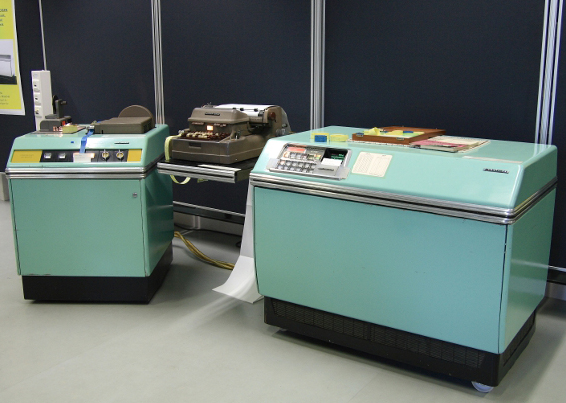 LGP-30 up and running, picture taken on the Day of Sciences in 2007

The actual computer is at the right. It contains the CPU, the magnetic drum memory and the power supply with power controller and ventilation. The typewriter is a Friden Flexowriter and serves as input/output device for the system. It is used for input from keyboard or papertape and output to paper and/or papertape. The smaller box at the left contains the additional optical highspeed papertape reader and a fast punch. 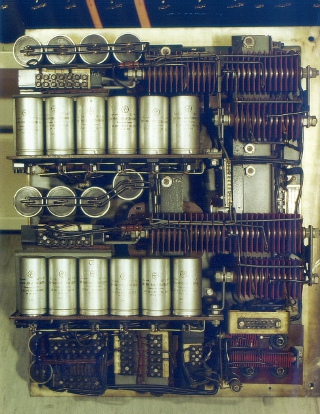 The power supply by itself has already a reasonable weight, one can see nicely the batteries of electrolytic capacitors (the silver cans) and the Selenium rectifiers (the red ribs); the transformers and chokes are hidden underneath. The supply delivers voltages of +150V, +300V, -160V and -20V. The logic voltages in the machine are 0 and -20V. 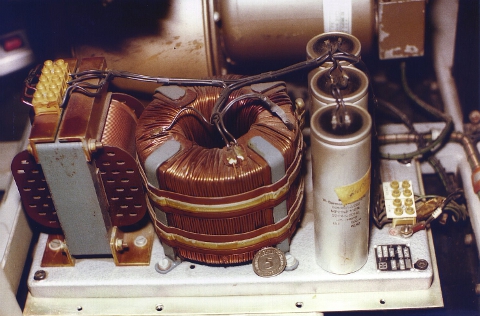 Since an electronic stabilisation of a power supply of this power class (about 1500W) was practically impossible at that time, instead, a magnetic constanter was used between the line input and the power supply.

Addendum: In the meantime we have found a bit more on the history of this computer: it hasn't been at the university from the beginning but rather belonged to the firm Stahlbau Seibert in Saarbrücken / Aschaffenburg. It was then presumably taken back from the manufacturer, repainted and sold to the university.

To the top of the page