Computer Museum at the Department of Computer Science

Completed projects of the Computermuseum at the Department of Computer Science 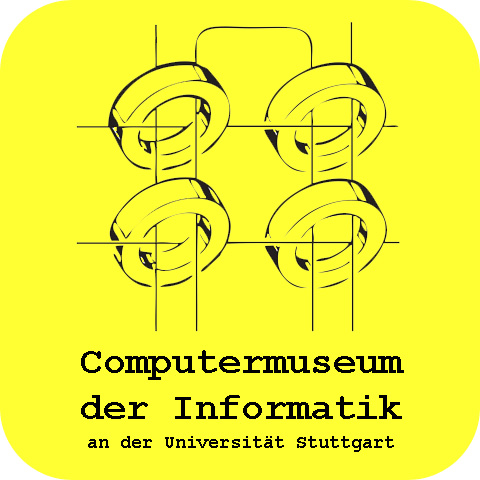 In cooperation with universities and industry partners, the computer museum has realized a number of different projects.

Project partners were among others:

In February, the backup and archiving of all DC100 cassettes for HP machines in the inventory was started. First the tapes for the terminals of the HP2640 series, for this purpose a programm was written specifically to create a 1:1 image. Then the tapes for HP85, HP9845 and others.

Restoration of the HP 2116B minicomputer. There were a few transistors and a capacitor in the core memory controller defective, otherwise everything has been running fine since then. A punched tape reader and punch was added, to top it all off, there is now a fast serial connection via DS-1B' to the HP 2100 computer, which then serves as a server, e.g. to load programs remotely from disk to the 2116 without having to take the detour via punched tape.

For the first time, a bachelor thesis was written within the framework of the museum. The thesis "Development of a programming aid for the Diehl Combitron" was written by Felix Queißner and provides, among other findings, an excellent tool for programming the Combitron in machine language.

Restoration of the Philips PM 3230/06 oscilloscope.

The PDP-8 turned 50 years old. On the occasion of the anniversary a nice article was published in the Zeit-Magazin with our Classic PDP-8 (issue 13/2015).

Restoration of the Philips GM 5666/01 and Nordmende UO 963 oscilloscopes.

A small mishap in the console typewriter of the IBM1130 system forces us to repair the machine with some improvisation.

The State Library of Regensburg includes our museum catalogue 10 years Computer Museum of Stuttgart Computer Science in its library stock.

From the IBM museum we received several boxes of microfiche punch cards on loan, which were scanned in painstaking work. They contain e.g. circuit diagrams and descriptions of SLT modules of the S/360 and IBM 1130.

The MINCAL 523 computer was completely reverse-engineered due to lack of documentation. This includes drawing the circuit diagrams of the individual modules, internal wiring, reading the ROM and core memory modules, disassembling the microcode, reconstructing the machine instruction set and analyzing the I/O and interrupt section. Only then was it possible to repair the machine and write small test or demo programs. Since then we have probably the only working MINCAL computer.

With the help of a Stellaris microcontroller development board from Texas Instruments, which was kindly provided by Mr. Felten, an interface for reading the raw bitstream from floppy disks was built, so that in combination with self-written software basically any floppy disk format can be read and after appropriate analysis also decoded. In principle, it is comparable to the Catweasel controller (hardly available) or DiscFerret (also hardly or not available at all). This made it possible, among other things, to read and save the diskettes from the Signetics TWIN system (it is assumed that these are the only available ones in the world, since no other system seems to exist anymore).

Design and construction of an ISA plug-in card for reading hard disks with SMD interface
The Landesarchiv Baden-Würrtemberg came to us with the request to read out three SMD hard disks. The difficult thing is that such a hard disk cannot be installed in any computer with SMD controller, because the recording format depends on the controller, and there is no documentation available. Therefore, a generic controller was designed for a PC that reads the data streams from the hard disk without further processing and writes them locally to a file. All further steps to recover the data can then be done by software, so that all possible recording formats can be implemented if required (if desired). This thus also allows the readout of other SMD hard disks of unknown origin, some of which the museum owns.

In the course of the reverse engineering of the Diehl Combitron, it was possible to read out the steel perforated strips of the machines (we own three different copies), transfer them to a UNIX computer and disassemble them. Thus we are the only ones worldwide who know the firmware of these machines.

The Deutsches Museum in Munich adds our museum catalogue 10 Years Computer Museum of Stuttgart Computer Science to its library stock.

On the occasion of an article in the magazine c't, written by an employee of the FH Kiel, the only (at least European) specimen of the first commercially distributed computer mouse - the Telefunken Rollkugel - was "rediscovered" in our country. Further research in the field of the history of input devices is underway, including research by Prof. William Buxton of Microsoft Research, which refers to our specimens (there are two available).

The Berlin archive of the Federal Commissioner for the Records of the State Security Service of the former GDR was looking for a way to read a removable disk stack from an ESER computer system. Unfortunately, we could not provide this service due to a lack of suitable hardware.

Spiegel Online received two images of the Raytheon 704 for an article about a game designer.

Dr. Gerard Alberts from the University of Amsterdam, lecturer in the history of mathematics and computer science, visited our museum after a lecture at the State Academy of Fine Arts and was very enthusiastic about the demonstration: "Thank you very much for visiting your museum yesterday. It was an extra Excursion a l'improviste to conclude the lectures at the Academy of Fine Arts here in Stuttgart. I guess you couldn't know how exactly your performance fitted in with my lectures: Mercury storage, wire storage and core storage, I just mentioned. As an introduction to the history of software, I proudly discussed the sounds and music of early computers, and ... there it is being demonstrated live. "If we had arranged it, it couldn't have been more fitting."

After the visit of Prof. Albert and some students of the State Academy of Fine Arts, Mr. Klemens Krause was asked to take over two teaching positions in the subject "storage technologies". We were also asked to help supervise a conservation project dealing with the video installation by Nam June Paik. Among other things, we were able to back up the software and data from the responsible control computer, which was getting on in years, and to provide the project with assistance for further research.

During the shooting of the film "The Baader-Meinhof Complex", Constantin Film GmbH in Berlin was looking for an old mainframe computer as a loan for a scene and asked us for the IBM 1130 system. We did not agree on the modalities, so that a Telefunken TR440 system from Frankfurt was used instead.

The HP Computer Museum in Australia became aware of our HP9000/840. Obviously we have the only executable (possibly even existing) copy of the first PA-RISC computer from Hewlett Packard. As a result, we are referenced in connection with this computer in several places, e.g. on the websites of the HP Computer Museum and in the book "The HP Phenomenon" by Raymond L. Price.

The University of Tübingen, under the direction of Prof. Herbert Klaeren, director of the Tübingen Schickard-Institute for Computer Science, invited us to a lecture of the Studium Generale with the topic "What can be learned from a computer museum?

The city museum of Tübingen asked us to loan some exhibits from our museum for a computer exhibition in autumn. We were happy to meet this request.

The Association pour un conservatoire de l'informatique et de la télématique (ACONIT) in Grenoble also owns an IBM 1130 system, but this is currently not operational. Jacques Pain contacted us, and we also got in touch with the developer of the Swiss version of the 1130 ALGOL compiler, Olivier Lecarme, Emeritus at the University of Nice.

While cleaning up at the Physics Institute, a few students found boxes of punched cards and punched tape in a cupboard, which they handed over to us. We were subsequently able to determine that as ALGOL programs and control data for a Zuse Z64 graphomat. Since the Graphomat, which works without a computer, needs punched tape with very special data for plotting, which controls the gears, among other things, we have written a few programs that decode this data and also translate it to HPGL, the plotter language of HP.

To enable us to archive and save the data of the punch cards and exchangeable disks of the IBM 1130 system, we "flanged" a V.24 interface to the punch tape puncher. This makes it possible to transfer data to a UNIX computer, for example, via a serial interface instead of punching out on punched tape by replugging a cable. We have therefore also written some assembler and FORTRAN programs that read in stacks of punch cards or removable disks and transfer them 1:1. The images of the removable disks can easily be used in an 1130 emulator, for example. Since then we are able to read in and save any punch cards. For example, we can transfer programs on punched cards to a modern computer, convert them to ASCII and burn them on CD.